May 01, 2012
Are ground squirrels making you a little nutty? What crazy methods have you tried to control them? 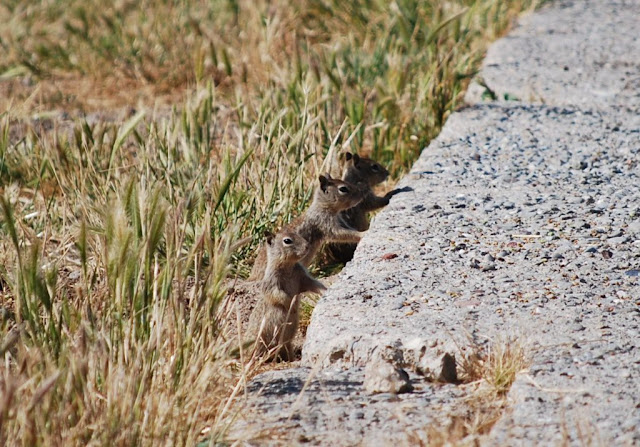 Before we created the Burrow Blocker, our ranch was over run by ground squirrels. We were so desperate for solutions that we tried almost everything to get their population under control. Since we didn't want to risk poisoning our dogs, cats or other wildlife with pesticides, we tended to get pretty creative. Here are a few crazy things that we've tried:

Wrigley's Gum - I'm not sure why it had to be Wrigley's gum but we heard it worked, so we tried it. First we put the sticks of gum in the holes and a few weeks later, when the ground squirrels were as plentiful as ever, we thought maybe we should have chewed it first. We had lots of holes and lots of gum and our jaws got tired pretty quickly. All we ended up with was fresh breath and gum stuck to our shoes...and still too many ground squirrels.

Water - The next idea was to just flush them out with water. We put the hose up to the holes and opened the valve. Wet ground squirrels kept popping up all around us. When we were done, the water absorbed into the soil. That left us with freshly bathed ground squirrels with clean burrows.

Dog Hair - Dog hair sounded like a terrific idea. It didn't cost us anything and we had a never ending supply. (Our ranch dogs are Great Pyrenees - big, white and fluffy dogs that shed.) The thought was that you put dog hair in the ground squirrels' burrows and the little critters would smell the dog and run away in fear. That's not quite what happened. The ground squirrels were running alright, actually more like frolicking in our fields with giant white dust bunnies floating through the air. At least the birds helped gather up all the dog hair and used it in their nests.

Spray Insulation - After a stop at Home Depot, we were armed and ready to stop the ground squirrels once and for all. With cans of orange spray insulation in hand, we began to fill the holes around the foundation of the barn. Apparently, the little pests thought that we were feeding them spray cheese. They chewed right through the stuff and spread it throughout the ranch. I have to admit it added a little color to the place. Although, visitors often asked in a concerned voice, what the pieces of orange lava looking stuff was.

Urine - We heard and read a few places that we should put coyote urine or human urine in the holes. This is one we never tried. I couldn't find a coyote willing to pee in a cup and as far as finding a person...we had too many holes and not enough beer.

Dealing with ground squirrel over-populations can be extremely frustrating, so finding the humor in it all, helps. What also helps is discovering a green solution that actually works! Now with the Burrow Blocker, we don't have a problem with ground squirrels, but we can no longer blame the destructive critters when we act a little nutty.

August 24, 2012
Do you know the difference between a Gr ound Squirrel and a Gopher ? If you are battling burrowing rodents on your property, after awhile you might just start channeling Carl Spackler, Bill Murray's character in the movie, Caddyshack. Remember when Sandy McFiddish, the head groundskeeper of the golf course told Carl, in his rich Scottish accent, "Carl, I want you to kill all the golfers on the golf course."? Carl replied, " Correct me if I'm wrong Sandy, but if I kill all the golfers they'll lock me up and throw away the key." Sandy yelled, " Not golfers, you great fool! Gophers, rodents! THE LITTLE BROWN, FURRY THINGS!" Carl replied, "We can do that. We don't even need a reason."﻿ Remember that destructive dancing gopher in Caddyshack? (Be patient...it has a long intro.)     Most of the people that visit this blog, do have a reason. They want those destructive diggers to just stop destroying
34 comments
Read more

How To Get Rid of Ground Squirrel Holes

January 16, 2018
It looks simple. There is a ground squirrel hole. Just start shoveling dirt in it and soon the hole will be gone.  Some athletic fields are so riddled with dangerous holes, they bring in tons of dirt and use bobcats to fill the holes.  Surprise! Before the next day, most of the holes reappear! Fill it again and the same thing happens.  Those ground squirrels are persistent little diggers. Why doesn't filling in ground squirrel holes using a shovel work? Shoveling in the holes is often unsuccessful, because the hole is topped off with dirt. The ground squirrel is hiding in a lower portion of the tunnel system and they dig their way out as soon as you leave the area. What is the best way to fill ground squirrel holes? The  Burrow Blocker  machine is a fast, easy, and effective way of filling in ground squirrel holes.The patented machine pumps a slurry of sand and water into the hole. The water is absorbed into the soil and all that remains is the sand. The burrows and tunnels a
Post a Comment
Read more