The ground squirrel mating style is officially called: polygynandrous. That means they are promiscuous litter critters that mate with up to 4 others.

In California, breeding season runs from December - April. The further south, the sooner the ground squirrels start breeding. After 25-30 days gestation, the female has a litter of 1-15. Yes, you read it right...up to 15 ground squirrels! Fortunately for us and the female, they usually have 7-8 and only one litter per year.

Now is the time to prepare for the new wave of destructive diggers. After 6 weeks of growing up in their burrow, the litters are starting to emerge from their nests.
Young Ground Squirrels begin to burrow as early as 8 weeks. 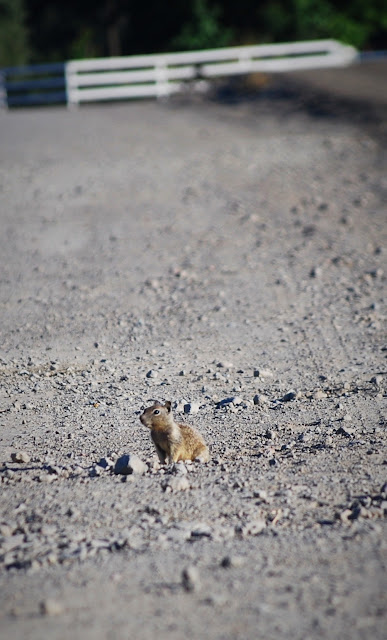 The young look like miniature lighter colored versions of the adults. They stay near the nest until about 6 months of age. Then young ground squirrels will move into old abandoned burrows or scatter off to new territory. Ground squirrels have been known to travel up to 5 miles to start a new colony.

They are sexually mature by 1 year of age and will repeat the cycle all over again. Let's just hope that it isn't repeating on your land. Oh, and I forgot to mention that ground squirrels live up to 6 years in the wild. Most often, they live for 3-4 years, even less if you maintain ground squirrel control.

August 24, 2012
Do you know the difference between a Gr ound Squirrel and a Gopher ? If you are battling burrowing rodents on your property, after awhile you might just start channeling Carl Spackler, Bill Murray's character in the movie, Caddyshack. Remember when Sandy McFiddish, the head groundskeeper of the golf course told Carl, in his rich Scottish accent, "Carl, I want you to kill all the golfers on the golf course."? Carl replied, " Correct me if I'm wrong Sandy, but if I kill all the golfers they'll lock me up and throw away the key." Sandy yelled, " Not golfers, you great fool! Gophers, rodents! THE LITTLE BROWN, FURRY THINGS!" Carl replied, "We can do that. We don't even need a reason."﻿ Remember that destructive dancing gopher in Caddyshack? (Be patient...it has a long intro.)     Most of the people that visit this blog, do have a reason. They want those destructive diggers to just stop destroying
4 comments
Read more

November 10, 2016
People like to share with me their "Do It Yourself" Remedies for Ground Squirrels. Here are a few that I've recently heard. I can't guarantee if they work, but they're at least creative! Home Remedies for Ground Squirrels & Prairie Dogs GUM - Not ordinary gum, but Bazooka Bubble Gum. You know, the hard squares of gum that as a kid almost broke your jaw on the first bite?  Once a week, this guy's neighbor puts 1 square of Bazooka gum in every ground squirrel hole on his property. He has almost 100 holes, so I doubt if he takes the time to read the comics wrapping each gum square. The neighbor says it works well at eliminating the young ones because they can't digest the gum. According to an expert, Jim Knight, a Montana State Extension Wildlife Specialist . "Bubble gum might sometimes clog a ground squirrel's intestines or burst its stomach, but no one has conducted scientific studies on its overall effectiveness. It's hardl
Post a Comment
Read more