1.  A Bumper Crop of Ground Squirrels is Not the Goal
Have you ever heard of anyone with a ground squirrel farm? There are too many farms that look like they are raising burrowing rodents. Predators like hawks, snakes and coyotes might think it's a good idea for a restaurant, but farmers don't have a use for them. If the area predators can't keep them under control, over-populations of ground squirrels and prairie dogs mean lots of hungry rodents devouring the hay. Besides eating away profits, these rodents pose a health risk to humans through the spread of disease, such as the plague. 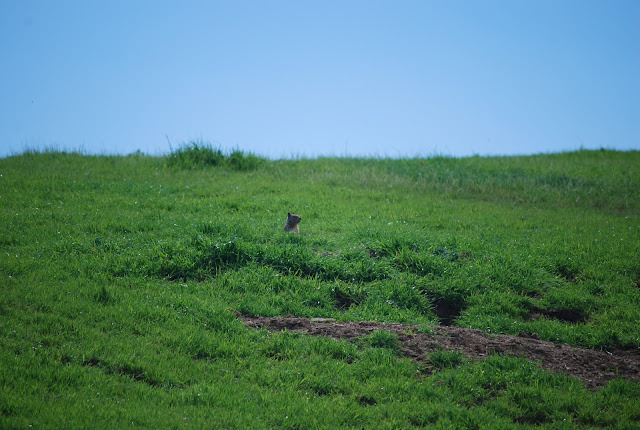 When ground squirrels and prairie dogs dig burrows, they bring soil and rock to the surface. The end result is mounds of dirt near the burrow openings. The longer they live in an area, the more extensive their burrow system becomes. These destructive rodents continue to enlarge their burrow systems by digging additional entrances and constructing new tunnels. The more they dig, the more mounds and holes destroy the fields. These numerous large holes and mounds of soil can make harvesting difficult, dangerous and costly.

A Nevada alfalfa grower said that they cut the perimeters of the field at the end of the day because they will have to sharpen the blade after they encounter the mounds. Besides the time and hassle it takes to resharpen the blades, it's dangerous for the equipment operators to drive over the massive mounds and holes. 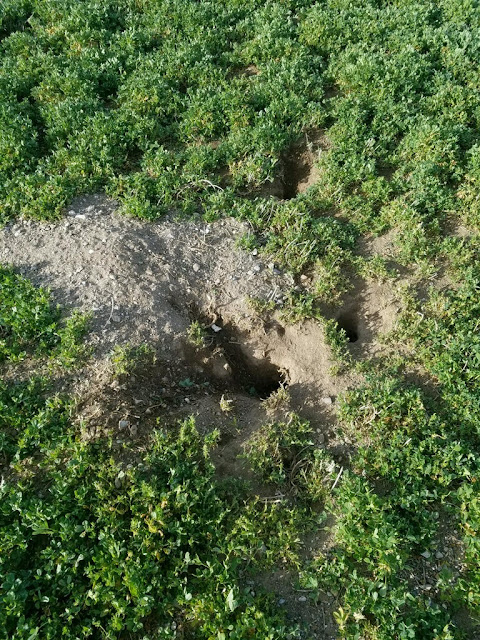 3.  Heavy Bales are Good - Unless the Bales are Heavy with Dirt & Rocks
The excavated ground squirrel burrows leave mounds of dirt that can get scooped up when baling the hay. Heavy bales are a good thing, unless they are heavy with rocks and dirt. 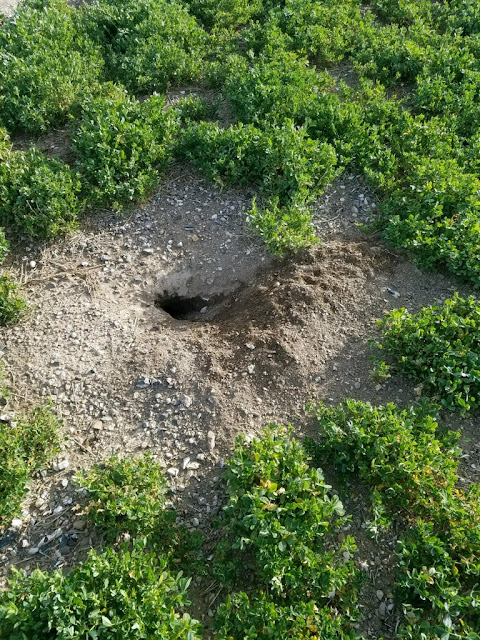 Farmers will tell you that the ground squirrels aren't always in the center of the field. If the perimeter of the hay fields look like they're surrounded by small bomb craters, there's a serious problem.

From the planting acres lost, to the damage of equipment and the amount the hungry rodents devour, it all adds up to huge financial losses for the hay farmers!

August 24, 2012
Do you know the difference between a Gr ound Squirrel and a Gopher ? If you are battling burrowing rodents on your property, after awhile you might just start channeling Carl Spackler, Bill Murray's character in the movie, Caddyshack. Remember when Sandy McFiddish, the head groundskeeper of the golf course told Carl, in his rich Scottish accent, "Carl, I want you to kill all the golfers on the golf course."? Carl replied, " Correct me if I'm wrong Sandy, but if I kill all the golfers they'll lock me up and throw away the key." Sandy yelled, " Not golfers, you great fool! Gophers, rodents! THE LITTLE BROWN, FURRY THINGS!" Carl replied, "We can do that. We don't even need a reason."﻿ Remember that destructive dancing gopher in Caddyshack? (Be patient...it has a long intro.)     Most of the people that visit this blog, do have a reason. They want those destructive diggers to just stop destroying
4 comments
Read more

November 10, 2016
People like to share with me their "Do It Yourself" Remedies for Ground Squirrels. Here are a few that I've recently heard. I can't guarantee if they work, but they're at least creative! Home Remedies for Ground Squirrels & Prairie Dogs GUM - Not ordinary gum, but Bazooka Bubble Gum. You know, the hard squares of gum that as a kid almost broke your jaw on the first bite?  Once a week, this guy's neighbor puts 1 square of Bazooka gum in every ground squirrel hole on his property. He has almost 100 holes, so I doubt if he takes the time to read the comics wrapping each gum square. The neighbor says it works well at eliminating the young ones because they can't digest the gum. According to an expert, Jim Knight, a Montana State Extension Wildlife Specialist . "Bubble gum might sometimes clog a ground squirrel's intestines or burst its stomach, but no one has conducted scientific studies on its overall effectiveness. It's hardl
Post a Comment
Read more